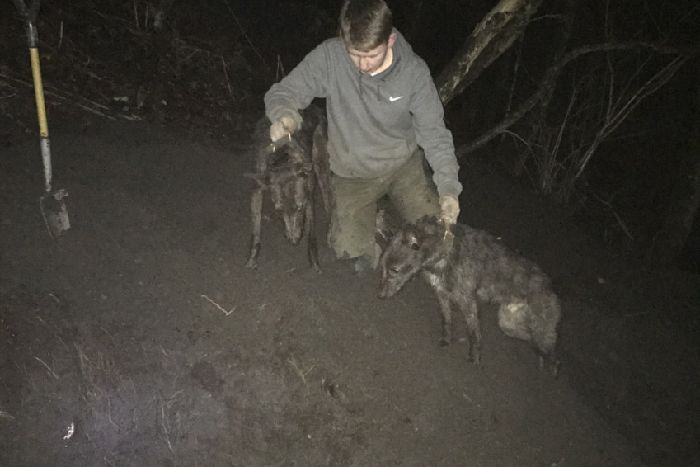 A Craigneuk man has been sentenced to 21 weeks in prison and a 15 year ban on owning and/or being in control of any animal for keeping and training his three dogs for animal fighting.

Connor (20) of Gateside Road confessed to keeping his three dogs, two deerhound lurchers and a bull terrier, for animal fighting.

Commenting on the investigation and court case, a Scottish SPCA undercover Special Investigation Unit (SIU) inspector said, “We became aware of Connor following an enquiry into an abandoned patterdale terrier, found in the Carnwatch/Carluke area, which had injuries consistent with badger baiting and fighting. The dog had to be euthanised due to the extent of his injuries.

“Our investigation led to the home of Connor and with a warrant, we discovered evidence to suggest he was engaging in animal fighting.

“We recovered proof that Connor had held conversations specific to purchasing dogs for, and discussing, animal fighting.

“Other items recovered from the house included numerous magazines and books relating specifically to hunting and fighting dogs with wild animals, hunting clothes, devices used to lure foxes called fox callers, a torch identical to one found during the excavation of a badger sett and knives, many of which were subsequently found to have badger blood and DNA.

“We were able to gather the DNA evidence thanks to Science and Advice for Scottish Agriculture (SASA).

“Multiple items found matched those in Connor’s possession of him posing with dead wild animals and his three dogs.

“Other images confirmed his presence at badger baiting sites and showed his own dogs at the entrance to a badger sett.

“There were also men digging into the ground at night in woodland. This is an activity carried out as part of the badger baiting process. Other pictures include a dog with injuries consistent with badger fighting.

“We welcome the sentence handed down to Connor. He engaged in depraved acts that showed his complete disregard for animal welfare.

“He caused extreme levels of suffering to the wild animals involved and put his three dogs at great risk of injury or death, and failed to get any veterinary treatment when they were injured.”

The Scottish SPCA’s special investigations unit are experts in investigating animal fighting offences and rely on information from the public to continue to put a stop to this horrific activity.

All information shared with the Scottish SPCA on 03000 999 999 can be treated confidentially.