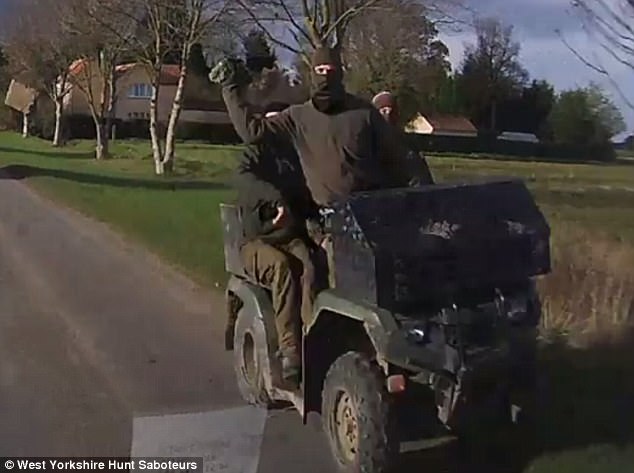 This is the moment masked yobs on a quad bike hurled rocks at a team of hunt saboteurs smashing their windscreen.

The dashcam clip shows the three thugs riding on a single bike towards a van being driven by West Yorkshire Hunt Saboteurs.

Two rocks collide with the saboteurs’ windscreen before the balaclava-clad men speed off from the scene in North Yorkshire.

Police are investigating the attack which happened on Saturday at around 1pm while the saboteurs were protesting against the Badsworth and Bramham Moor Hunt.

A spokesperson for the saboteurs group said: ‘They were violently attacked. Two rocks were thrown at the windscreen of our moving van by masked thugs driving a quad bike at speed.

‘Our van driver and front seat passenger were very, very lucky to escape without serious injury and police are currently investigating the horrific attack.’

The group alleged the rocks were thrown by people linked to the hunt although their identity has not been established.

Lee Moon, spokesperson for the Hunt Saboteurs Association branded the attack ‘the height of stupidity’.

He said: ‘It’s down to luck and exceptional driving that someone wasn’t seriously injured as a result of this attack.

‘Throwing rocks at a moving vehicle is the height of stupidity and we formally ask both North Yorkshire Police and the Badsworth and Bramham Moor Hunt what they plan to do about this incident.

‘They can be assured that such violence doesn’t deter us, rather it makes us more determined, and both these hunts can look forward to increased scrutiny from hunt saboteurs in the weeks to come.’

A police spokesman said: ‘North Yorkshire Police is investigating this criminal damage incident which happened in the Church Fenton/Biggin area at around 12.45pm on Saturday 18 November 2017. ‘