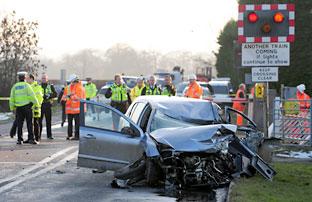 A JOCKEY caused £150,000 damage when he crashed his car into a passenger train on a level crossing – but has been fined only £350 and has escaped a driving ban.

The barriers were down, the warning lights were flashing, bells were ringing and a Transpennine Express service was crossing as Richard Tierney drove his Astra on to West Knapton level crossing near Malton, on the straight B1258, at 30mph to 35mph, York Crown Court heard.

Dazzled by the sun and deafened by his car radio, he had not seen the crossing until too late, and despite slamming on his brakes and trying to swerve round the back of the train, he crashed into it and the barriers.

The impact, at 1.20pm on February 3 last year, made his car rebound five metres backwards from the railway, but he escaped serious injury.

Recorder Timothy Hirst said: “It was bordering on dangerous driving. You were having problems with the sun, which all drivers have to face. In the final analysis, you simply have to stop if you can’t see.”

He said trains on the line travelled at 60mph.

Tierney, 21, of Snainton, near Scarborough, pleaded guilty to careless driving, and was fined £350 with a £15 Government-imposed victim surcharge and £150 prosecution costs.

The maximum sentence was a £5,000 fine and a driving ban.

He was also given six penalty points to add to the three already on his driving licence.

The 100-tonne Liverpool to Scarborough Transpennine Express service had 25 passengers and a driver on board at the time of the incident.

None of them was injured, though they were shocked by the crash.

They completed their journey two hours later by coach. Immediately after the collision the train did an emergency stop which brought it to a halt 400 metres down the track. The line was closed for four hours.

Bashir Ahmed, prosecuting, told York Crown Court that Tierney was travelling at 33mph towards the A64 at the moment of the collision, and later told police he did not realise he was at the level crossing until he saw the train and slammed on his brakes. He did not hear the warning bells because his car radio was on.

The damage to the train and to the barriers which were broken in the collision cost £150,000 to repair.

Ruth Cranidge, for Tierney, said the sun was low and straight in his eyes. It was also reflecting off snow on the fields and standing water on the road. The sun’s position meant he did not see the warning lights or the barrier which was thin and partially white. She said the damage to the train appeared slight, but probably cost a lot to repair because, to meet health and safety requirements, train repairs were expensive.